We specialise in repairing Tremec Gearboxes which are known for their reliability and quality from TR-3650, TKO, T5 and T-56 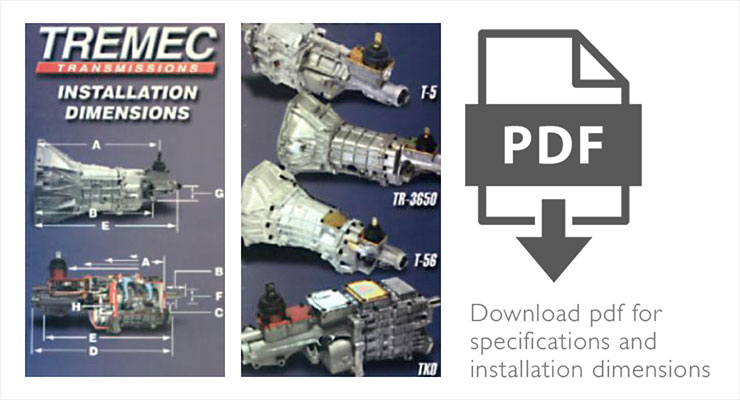 The TR-3650 was introduced for the Mustang 4.6 modular motor in 2001. Incorporating the best features of its predecessor the torque capacity was elevate to 360 1b. ft. by increasing the size of the capacity (85 mm centre distance) and creating an all-new aluminium case.

The TR-3650 also includes a synchronised reverse gear and a more robust multi-rail internal shift-rail system. The shift forks have been re-designed to minimise shift fork deflection resulting in a clean crisp shift feel. The TR-3650 utilises an integrated clutch housing limiting its use to the 4.6 modular engine. Only available through Ford.

Built to 0EM standards, the all-new line of TKO 5-speed overdrive transmissions are the most versatile transmissions ever introduced. With eight different shifter locations available, you will be able to install the shifter in the Original stock console location.

Now standard with an internal three-rail shifting system and a short-throw billet aluminium shifter you’ll never miss a shift. The TK0 is a proven winner at the drag strip and on road courses. With an optional overdrive ratio of .64, it’s also ideal for street use. This one transmission does it all!

This lightweight, highly versatile transmission has been installed as original equipment in many vehicles over the years. The T-5 is used in pick-up trucks, sport utility vehicles, and compact passenger vehicles.

The T-5 was offered as standard equipment behind the popular 5.0 Mustang and is still used in V-6 Mustang applications today. The transmission uses an aluminium case and aluminium shift forks with an internal single-rail shift system.

Originally introduced on the Dodge Viper in 1992, the T-56 is the transmission of choice for today’s high-performance sports cars. Designed to tame Vipers and Cobras, the T-56 was tough enough to win The 24 Hours of LeMan. the T-56 is also available in many different aftermarket configurations. Options include integrated clutch housings to fit Ford, GM, and Chrysler applications, or an adapter plate design that will allow the transmission to be bolted directly to your existing bell housing.

This transmission can handle the torque of today’s most powerful engines making it ideally suited for road racing or for street performance enthusiasts.

Other Gearboxes used by Aston Martins

Oerlikon Graziano is probably most famous for its six speed transaxles. These are now standard fittings for high performance vehicles, not just Aston Martins, but also for Ferraris, Lamborghinis, Maseratis and Alfa Romeos. The Aston Martin DB9 automatic has been fitted with Oerlikon Graziano Rear Drive Module.

Although Oerlikon Graziano provides both after sales and spare parts, P & W Engineering can act on your behalf to ensure you get the best service and products.

ZF provides driveline and chassis technology, and is a leading worldwide automotive supplier. As a worldwide organisation, parts are provided for transmissions, and much more. ZF also provides remanufactured and repaired gearboxes for its customers – including Aston Martins

ZF was founded in 1915 to develop innovative products for optimal mobility. Gear wheels and transmissions for Zeppelins have led on toeven bigger things. Since then the company, which is now a leader in gearbox production and drive trains, also works toprovide complete remanufactured gearboxes and fully warrantied transmissions.

With a rich history and involvement in motor sport – from the 1930’s to the current day, ZF transmissions and differentials have graced the likes of Mercedes, BMW roadsters, Lotus and the legendary Ford GT 40.

Introduced in 1956, the torqueflite was Chrysler’s three speed automatic transmission. Used by all Chryslers, as well as by American Motors, vehicles such as Jeep, International Harvester and The Bristol all carried Chrysler gearbox. There have been cases where the Torqueflite gearbox from Chrysler has replaced Borg Warner transmissions – even though this seems to have happened more with trucks.

The torqueflite transmission was reputed in 1956 to be the simplest, more reliable, dependable, quiet, efficient and economical part which ultimately gave the vehicle a competitive edge. This dominance in the transmission market lasted until 1964.

The Aston Martin DB4 Vantage uses a four speed all synchromesh gearbox unit, which was designed by David Brown transmissions, but assembled by Aston Martin at their factory in Newport Pagnell.